Hospice is about living!

The origins of the Peace Arch Hospice Society trace back to a community meeting initiated by First United Church in 1981. The impetus for the meeting related to the unmet needs of people in the community requiring palliative care. This first meeting evolved into a grass roots movement led by Teresa Hotell, the Society’s founder and first Executive Director. This group moved forward quickly and in August 1982 the White Rock Hospice Society was incorporated under the Society Act of British Columbia.

The early years were highlighted by volunteers providing their time and resources to ensure the Society achieved its mandate of providing support to palliative clients and their families and to educating the community about the hospice movement. The first hospice volunteers were trained by the Pastoral institute of British Columbia.

Peace Arch Community Services provided the first formal office space and some early funding support came from the United Way. By 1985, the Society’s trained volunteers were providing support to clients at Peace Arch Hospital, in care facilities in the community, and in private homes. During this period, the Society’s services were extended to provide professional counseling and grief support to individuals and families.

In the latter of half of the 1980s, the Society continued to grow locally and played an integral role in the development of a palliative care unit at Peace Arch Hospital. During this period, the Society also played a leading role in the establishment of the BC Hospice Palliative Care Association and had representation on the board of the BC Bereavement Foundation. By the end of the decade, the Society had a small paid staff and a vibrant volunteer group that needed more space in order to meet the community needs for hospice palliative care services and grief support programs. 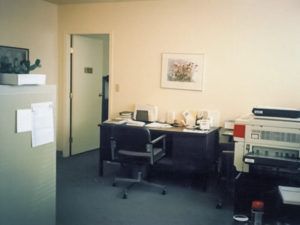 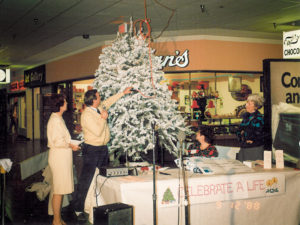 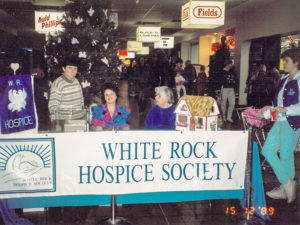 In 1992 the Society purchased a house on Russell Avenue in White Rock. This residence was converted to office and multipurpose meeting room space for the Society’s programs and services.  This facility became known in the community as the Hospice House. Though generous bequests from supporters during the 1990’s the Society was able to purchase the residence immediately to the west of Hospice House and it was used as a source of rental income over the years. Throughout the balance of the decade and into the current century the Society’s base of volunteers continued to grow and now numbers over 200. Volunteers include those directly serving clients and those who provide clerical and fundraising services among a myriad of other opportunities that present themselves. 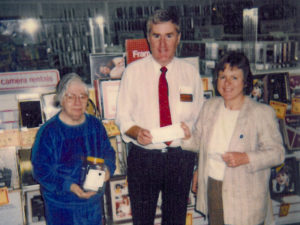 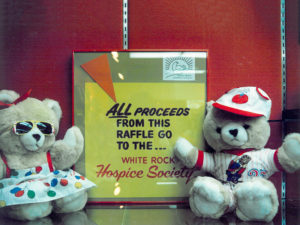 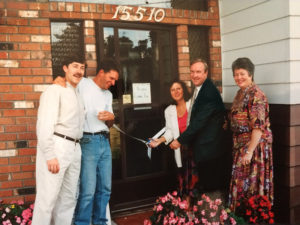 1992 – Ribbon cutting to the then ‘New’ Supportive Care Centre 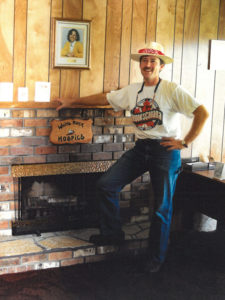 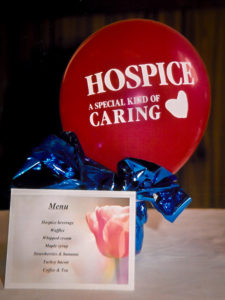 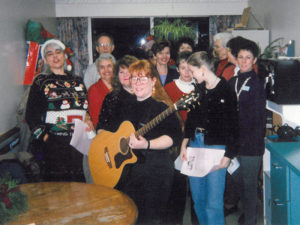 1998 – Carol singing in the palliative unit 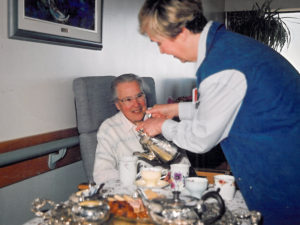 1999 – Tea Service in the hospice residence

As the Society approached its 20th anniversary in 2002, the provincial government created the Fraser Health Authority and soon there was a commitment to develop hospice beds in every community within Fraser Health. It was now clear that the Society would have the support of the Health Authority to reach its long held dream of creating a Hospice Residence, but to achieve this goal work had to be done to improve financial self sufficiency and strengthen every facet of the organization.

By 2006 plans were in place to develop the Hospice Society Thrift Store, which is now an example of what can be accomplished when hard work supports an achievable goal. Since it opened its doors to the public in February 2008, the Thrift Store has generated ever increasing sales, and by the end of the decade it was contributing 13% of the Society’s gross revenue.

In 2007 the Society began planning for a Hospice Residence in White Rock, however, the worldwide financial crisis that occurred in 2008 served to delay this project from moving ahead as quickly as it might have otherwise. While this was disappointing, it provided the Society with an opportunity to revisit the assumptions on which the project was based and to review the strategies intended to bring the project to completion. Through this period, the need for the Society to have appropriate space from which to deliver existing programs and to develop new programs became a primary objective.

The Society’s volunteer and client base continued to grow throughout the decade and during the two year period ending in 2009 the Society’s volunteer base increased by 32%. The new resources of people and money allowed for significant growth of existing programs and the development of many new programs to meet the demand of a vibrant and growing community.

It was also in 2009 that the property directly to the east of the Hospice House came up for sale. To complete their vision of having a Free Standing Hospice and Supportive Care Centre, the Society took a loan to purchase the property. This gave the Society added rental income and the land space they would need to fulfill their goal.

In 2009 the Society reviewed and renewed it Mission, Vision and Values statements, revised its constitution and bylaws, and developed a 3-year strategic plan. Subsequently a communication plan was launched that included the development of a new website and a print media campaign to create awareness and educate the community about hospice palliative care. 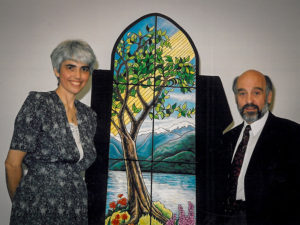 In 2010 the Society formalized a plan for board development and intentionally recruited new Board to fill the desired skills and abilities that had been identified a s necessary to continue the Society’s growth. The Governance model was modified and governance policies were developed that clearly identified and differentiated the roles and responsibilities of the Board and Executive Director.

The Society’s name was changed to White Rock South Surrey Hospice Society in 2010 to include reference to the South Surrey Community which had been served the the Society since its inception in 1982. The staff directed fundraising efforts and the recruitment of 3rd party and corporate sponsorships resulted in significant growth in revenue. This growth, combined with the continued success of the Thrift Store, resulted in the Society’s earned revenue representing 71% of gross revenue by the end of fiscal 2011 compared to 54% at the end of fiscal 2009.

Two major projects were on the horizon as the Society looked ahead to its 30th anniversary in 2012. The first project related to the planning and selection of new expanded space for the Thrift Store, which had outgrown its current space which was leased until the end of 2012. The continued growth of the operation was essential for the Society’s long term financial security and independence.

The second project related to a new expanded Supportive Care Centre and Hospice Residence. In late 2010 Fraser Health planning staff and their consultants began to work with community stakeholders to prepare a master concept site plan for the Peace Arch Hospital lands. During this exercise the Society was given a opportunity to provide Fraser Health with its planning objectives and functional requirements for the proposed Hospice Residence and Supportive Care Centre. At a meeting with Fraser Health staff in the fall of 2011, the Society was advised that Fraser Health was committed to providing a site located in the south-east corner of the Peace Arch Hospital lands for the development of these facilities. The Society was actively involved with Fraser Health in the planning of the build.  Many meetings took place with plans going back and forth until a final design was agreed upon by both parties. Once the approvals were to be in place and the land-lease negotiations completed, the Society would finalize building plans and commence to plan for a capital campaign to raise the funds needed to complete this project. They were looking forward to bringing this important project to fruition as it was a major step toward achieving their vision that all residents of the Semiahmoo Peninsula have the support they need as they face advanced illness and bereavement. 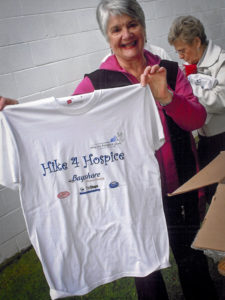 However, without warning, in the spring of 2013 the Ministry of Health announced that they would be giving a three million dollar grant to the Peace Arch Hospital & Community Health Foundation for the expansion of the Peace Arch Hospital Hospice. None of the 3 million was allocated to the Society and no monies were given for a Supportive Care Centre. Now with this new information, the Society’s Board of Directors had to set their focus on building a new Hospice Society Supportive Care Centre in order to meet the demands of the increased need of our services in our ever-growing community as well as providing even more services to the Peace Arch Hospital Hospice.  WRSS Hospice Society’s professional Staff, highly-trained Volunteers, and the many programs and services we offer to the community had outgrown their existing premises. Their focus in moving forward was to locate, secure, and build this much-needed and expanded Supportive Care Centre for those residents who were terminally ill or grieving in our community.

By 2014, preliminary architectural plans had been developed for the new Supportive Care Centre. Unfortunately it became clear that the Society would not be able to build the Supportive Care Centre on the current properties they owned. With this in mind, and the vision as strong as ever, the Society started looking for property that would be close to the newly proposed Hospice Residence.  In 2014, the properties were sold on Russell Avenue and a new property was purchased on 16A Avenue in South Surrey, on the same block as the future Hospice Residence.  Through the generosity of the builder who purchased the Society’s original properties, they were able to stay in their current building until their new Supportive Care Centre would be built.

In 2016, after much planning and hard work by the Staff and Board of Directors as well as through the generosity of the businesses and community at large, a very successful Capital Campaign was initiated and the 2.1 million dollar goal was reached.  On September 8th, 2016 White Rock South Surrey Hospice Society had their ground-breaking ceremony and the mortgage-free build was started.  Also during this time, after community consultation and an in-depth, comprehensive process, the Society changed their name to Peace Arch Hospice Society to better reflect the location of their growing community. 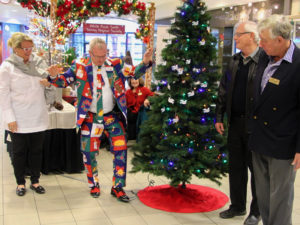 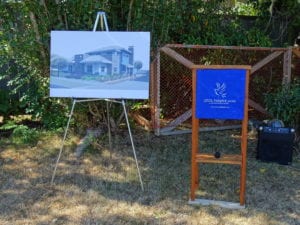 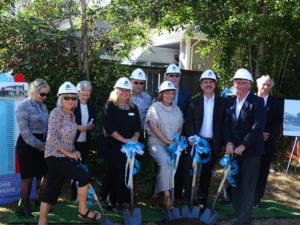 On October 10th, 2017 Peace Arch Hospice Society moved into their new facility at 15435 – 16A Avenue in South Surrey.  The new facility was purposely built, keeping in mind that the community members and businesses who supported the cause were entitled to transparency and responsible spending of their generous donations.  The beautiful new facility is a safe, warm and comforting building for Clients and Volunteers; a place where support is available and a special kind of caring takes place.

Volunteers are the heart of the Peace Arch Hospice Society.  Whether a Client, Auxiliary or a Thrift Store Volunteer, each one is as important as the other and the Society could not function without them.

No one likes to think of death and dying, but you, your family, or someone you know will need end-of-life care or experience grief from the loss of a loved one. The Peace Arch Hospice Society provides care, compassion, and support, inclusive of all cultures, faiths, and beliefs to all residents of the Semiahmoo Peninsula, helping to create a healthy community.

Hospice is about living, and you can take comfort in knowing that  Peace Arch Hospice Society will be here when you need us. 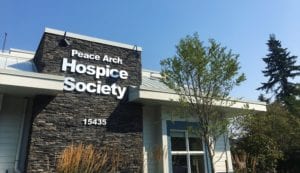 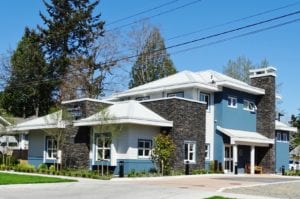 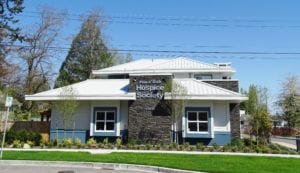 Where to Find Us

You have Successfully Subscribed!